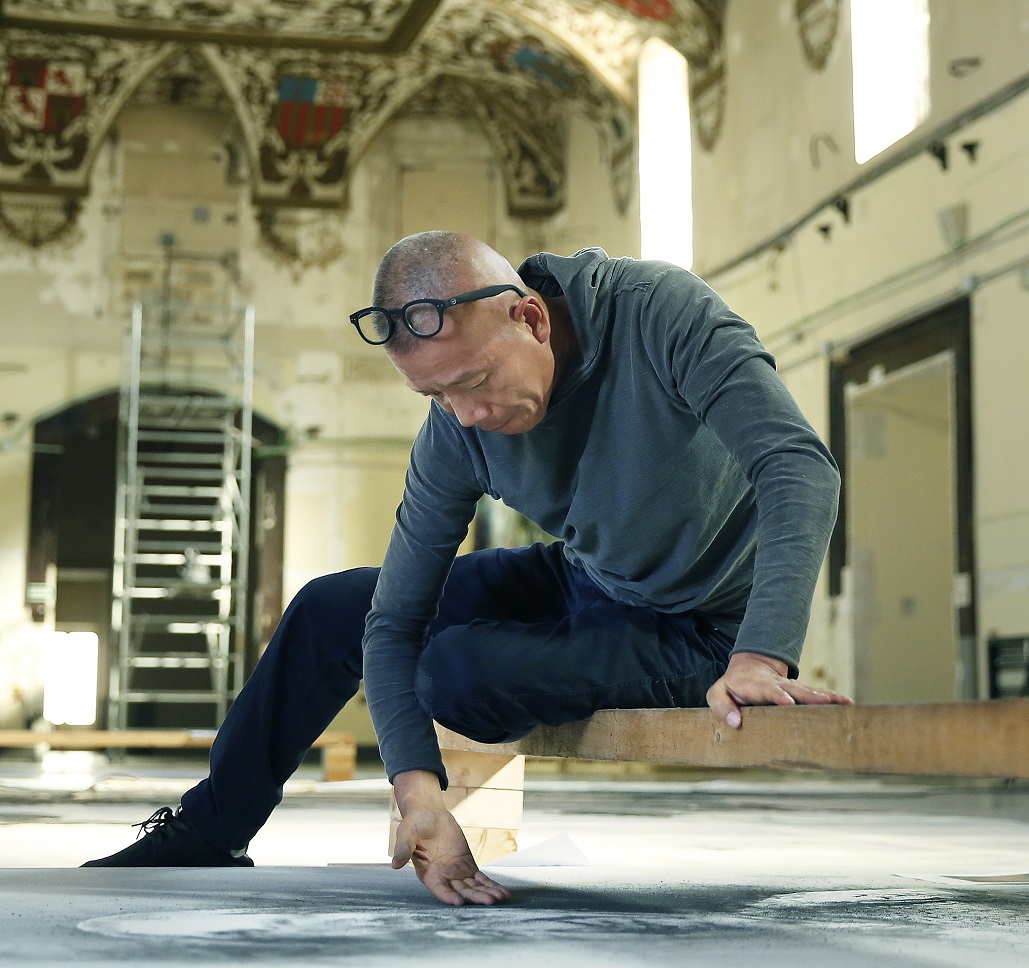 Cai Guo-Qiang was born in 1957 in Quanzhou, China. He was trained in stage design at the Shanghai Theatre Academy from 1981 to 1985, and his work has since crossed multiple mediums within art including drawing, installation, video, and performance. Cai began to experiment with gunpowder in his hometown Quanzhou, and continued exploring its properties while living in Japan from 1986 to 1995. This inquiry eventually led to the development of his signature outdoor explosion events. Drawing upon Eastern philosophy and contemporary social issues as a conceptual basis, his artworks respond to culture and history and establish an exchange between viewers and the larger universe around them. His explosion art and installations are imbued with a force that transcends the two-dimensional plane to engage with society and nature.

Cai was awarded the Golden Lion at the Venice Biennale in 1999, the Hiroshima Art Prize in 2007, and the Fukuoka Asian Culture Prize in 2009. In 2012, he was honored as a Laureate for the prestigious Praemium Imperiale, which recognizes lifetime achievement in the arts across categories not covered by the Nobel Prize. In the same year, he was named as one of the five artists to receive the first U.S. Department of State Medal of Arts for his outstanding commitment to international cultural exchange. His recent honors include the Barnett and Annalee Newman Foundation Award in 2015 and the Bonnefanten Award for Contemporary Art (BACA), the Japan Foundation Awards, and the Asia Arts Award Honoree in 2016.

His many solo exhibitions and projects over the past three decades include Cai Guo- Qiang on the Roof: Transparent Monument at the Metropolitan Museum of Art, New York in 2006 and his retrospective I Want to Believe, which opened at the Solomon R. Guggenheim Museum, New York in 2008. Cai served as Director of Visual and Special Effects for the Opening and Closing Ceremonies of the 2008 Summer Olympics in Beijing. His solo exhibition Da Vincis do Povo toured across Brazil in 2013, traveling from Brasilia to São Paulo and Rio de Janeiro. It was the most visited exhibition by a living artist worldwide that year, attracting over one million visitors. In June 2015, Cai created the explosion event Sky Ladder in his hometown Quanzhou. The artwork became the centerpiece of the Netflix documentary Sky Ladder: The Art of Cai Guo-Qiang, directed by Academy Award winner Kevin Macdonald. Fireflies, his largest public art project in the United States in the past decade, launched in Philadelphia in September 2017.

Major solo exhibitions in 2017 included October at the Pushkin State Museum of Fine Arts, Moscow and The Spirit of Painting at the Museo del Prado, Madrid. In 2018, his explosion event City of Flowers in the Sky was realized above Piazzale Michelangelo in Florence and marked the opening of his solo exhibition Flora Commedia at the Uffizi Galleries. Latest solo exhibitions in 2019 include In the Volcano at the National Archaeological Museum of Naples, the Transient Landscape at the National Gallery of Victoria, Melbourne, and Cuyahoga River Lightning at the Cleveland Museum of Art. He currently lives and works in New York.

Study for Uffizi: A Bouquet of Flowers No.1

ROCKING OUT AT OKTOBERFEST AT MGM